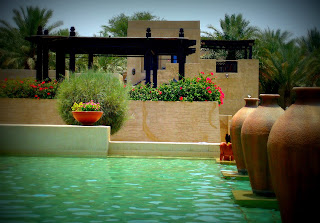 I just got back from a lovely trip to the Bab Al Shams Desert Resort & Spa. It had been a few months since my husband and I had taken a trip and we were looking forward to a nice break. Bab Al Shams means “gateway to the sun” in Arabic and the resort is about 2 hours away from Ajman. We’ve never been to a desert resort before and Bab Al Shams was offering some good deals for the Summer, so we thought of trying this one out. We set off on a rather hot Tuesday afternoon and we kept going… and going…. and going!

This resort is located off Exit 37 near the Dubai Outlet Mall. Apparently, we missed this exit and kept driving. After several frustrating calls to the resort concierge we finally figured out the mistake and somehow managed to get to the resort – after spending nearly double the time than was necessary on the road. After the sweltering drive, the complimentary mint lemonade and the fresh cold towels that they offered was indeed quite soothing.

The resort is designed like an old Arabian dwelling and has a traditional Arabic feel to it. The rustic décor and earthen colours were a welcome change to the swanky hotels that one is so used to these days. It really felt like being in an oasis with sparrows chirping away and the sound of water flowing enveloping us. There are several sit-out spots scattered around the resort – with comfortable swings and cushions strewn around. However as we went in the peak of Summer, the idea of lounging around in the blazing heat was far from appealing.
We retreated to the cool confines of our room. Our room was spacious and was well equipped with all basic amenities. We were greeted with fresh fruit, chilled water and a box of gourmet dates to munch on.

My favourite part was the bathroom – which gave off an earthy aroma when wet due to the earthenware accessories and fittings! Later, once the sun had set, we took a leisurely stroll around the resort. It was beautifully lit up with Arabic style lights and lamps, which gave a golden glow to the surroundings.


We started the next day with a satisfying buffet breakfast at the Al Forsan restaurant. With the sun beating down mercilessly, where else could we head to other than the swimming pool? Bab Al Shams has 3 pools – however the Infinity pool is the largest and also the only one open since the other pools were closed for maintenance.


The infinity pool looks out into the sand dunes of the desert and is again done up in an Arabic style – with large vases and rough walls. The entire pool is not too deep, for which I am thankful for since I do not know to swim. At the end of two hours of splashing around in the pool, I was blessed with slightly chafed knees and elbows – thanks to the rough floors & a lack of swimming skills – as well as a terrible tan – thanks to forgetting to slather on the sun block!

Once again, the mighty sun forced us to head to our rooms and we decided to order room service. The Butter Chicken arrived promptly, accompanied by steamed rice, roast pappad, raitha and chutney. It was lip-smacking and I had to stop myself from licking my plate clean!

After a short siesta, we headed out to the lawns where I tried my hand at golf and table tennis. There was also a falcon show and a complimentary camel ride. I wasn’t too keen on the camel ride and the falcon show was a little too cruel to watch for entertainment – as it involved the falcon hunting and killing a pigeon; so we gave both a miss and instead settled down into the sands to watch the sun set gracefully over the desert.

That night, we decided to check out Bab Al Sham’s Italian Restaurant – Le Dune. We were served some complimentary bread sticks and garlic bread along with a sun-dried tomato dip and a black olive dip. The bread sticks were fresh and the bread was soft. We were waiting for our food when a lady who was also dining at the restaurant walked up to us and gave us an extra coupon that she had – which entitled us to a free main course! Thanks kind lady – that was really sweet of you! We ordered Caesar salad, Spinach and ricotta tortellini and Spaghetti with shrimp. The portions were generous and everything was yummy. 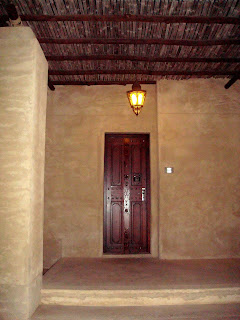 Bab Al Shams also has an Indian restaurant called Masala and a rooftop lounge called Al Sarab. Plus it also has a couple of bars. In addition, Al Hadeerah which is located a little outside the resort offers Arabic style entertainment and food. Since we’ve had more than our share of desert safaris and belly dancing, we decided to opt out of it.

On the whole, I completely enjoyed our short break away from our daily grind. I would definitely recommend Bab Al Shams to anyone looking for a relaxing stay.

- The concierge staff really need to be able to guide guests to the resort better. We wasted a lot of time, energy and money in finding our way to the place.
- The resort was hardly full and yet we were told that a late checkout was not possible. This was a disappointment.
-  In my opinion, the activities at the resort should ideally be free of charge for the guests. While golf, table tennis and snooker was free, other activities such as archery, yoga and rental bikes were not.
-  The lighting in the room could be better. Also there is no wi-fi in the rooms – which is surprising in this day and age!

- The staff were courteous and pleasant.
-  Clean, neat and well maintained.
-  The Arabic style design and hospitality lends a unique character to the resort.
Posted by Anne at 7:56 PM