Beyond The Blossoming Fields 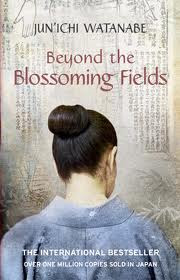 Beyond The Blossoming Fields is an awe-inspiring story of one woman’s struggle to overcome gender inequality and senseless stereotyping.

Beyond The Blossoming Fields is a novel based on the remarkable real life story of Japan’s first officially certified female doctor of Western medicine. Originally written in Japanese by Jun’ichi Watanabe, it has been translated into English by Deborah Iwabuchi and Anna Isozaki.

Ginko Ogino comes from a respectable family. The novel is set in the 19th century and as is customary to those days, she is married off in her teens. Unfortunately, she contracts gonorrhoea from a wayward husband and puts up silently with her suffering for several months. Without advanced medical care, her condition worsens, until finally one day, she can no longer bear it and she leaves her marital home.

On the advice of her childhood mentor, she proceeds to get treated by a doctor of Western medicine. Sadly, there aren’t any female gynaecologists around in Japan at that time. Any woman who has had to endure a gynaecological exam would readily vouch that it is hardly something that one looks forward to. And for a young girl who has grown up in a secluded and protected environment to be subjected to an invasive, personal examination by a brusque and clinical doctor, is beyond dreadful; especially because it isn’t her fault that she picked up the terrible disease in the first place.

The trauma that she undergoes during the course of her treatment, spurs Ginko on. She embraces the idea that she would one day become a doctor. For a woman to wish to be educated and to work as a doctor in the conservative and patriarchal society of the 1800s was definitely no joke. Even today, there are girls all over the world who are denied the right to education. One can then imagine how challenging it must have been for a woman to aspire to become a doctor during Ginko’s time.

Fighting a restrictive society which is impassive to her fate and is impervious to change, Ginko faces frustration, ridicule, contempt and even threats on the path of her dreams. One cannot help but be amazed by Ginko’s spirit and determination as she struggles to achieve her goal. From having to use the male restroom in college since there are no female restrooms, to running from pillar to post in the hope of being allowed to sit for the medical licensing exam, and being humiliated for being “just a woman” who thinks too much of herself, Ginko faces all her tribulations with a single-minded sense of purpose.

Although I cannot claim to have undergone such harsh challenges as Ginko, as an Indian woman reading her story, one can still very well understand and identify with her struggle to prove herself. As it is the case with many translations, the prose is somewhat stilted at times. Nevertheless, Beyond The Blossoming Fields is an inspiring read indeed.