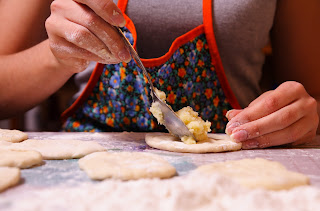 I love getting comments from readers on my blog. Of course I prefer positive remarks (Who doesn’t?) but constructive criticism is also appreciated. Now, I know that there are several visitors to my blog, who enjoy reading it but don’t actually leave any comments here for whatever reasons (laziness? Shy? Dunno how to?). However when they happen to meet me or see me online, they let me know how much they like my writing, which really makes my day :-)

Of course I have a stats monitor which shows me details such as how many visitors I get and from which part of the world etc. But when people actually think of letting me know that they like reading my blog it is indeed very encouraging. That is predominantly the reason behind this post.

I can generally spend hours together doing something which many think of as “uncool”. (Actually make that, do a lot of things which most people would term uncool! ) And that is…watching cookery shows!

Starting all those years back with some tacky and dull cookery shows on Doordarshan to the spunkier Samaiyal, Samaiyal on Star Vijay, I used to watch any cookery show that I came across. I was soooo into this that at one point I even considered taking up catering technology! Anyway thanks to my brother's words of wisdom, better sense prevailed and I did not do that – coz knowing me, I probably wouldn’t have had the energy and stamina to stand and slog away in a hot kitchen for a long time!

The fact that I actually enjoy watching cookery shows continuously baffles my husband who often wonders “Aren’t you bored?!” Well, no! I really take pleasure in watching the chefs create something delicious. Each chef has a different stlye and their signature touch. Sometimes the dishes are new to me, sometimes I already know how to cook them, sometimes I copy their recipes, sometimes I don’t. I would't even call myself a food lover because really I don't eat much at all. But irrespective of whether I am going to make the dish shown or not, I watch the shows anyway!

I think that there is so much to know about a country’s culture, history and tradition by looking at their food and their way of making it. You can see how one dish from one part of the world has been derived from or influenced some other dish from another part of the world-and the culinary borders blend and merge into one another. Some foodie facts are intriguing; some are fascinating while still some others simply succeed in just churning your stomach! You pick up all kinds of trivia! Did you know, for example, that Jamaican and Moroccan cuisines use a lot of spices common to the Indian palate? While we have dosas the French have crepes. Or that Molligatawny soup is supposedly the British pronunciation of “Molagu thanni” in Tamil or in plain English pepper-water? Or that there is an Italian pasta dish called Puttanesca which literally means “in the style of a prostitute” – because according to one theory, it is quick, easy and spicy! Hmmm ;-)

In recent times I have moved from watching cooking shows on TV to the Internet. After lurking anonymously at various websites I finally subscribed to not 1, not 2 but 4 cooking channels so far!(Well it’s free anyway!). I never leave any comments on their videos, which obviously they have taken a lot of time and effort to make, post and administer. So I thought that I would show all of them my appreciation here on my blog. And in case any of you are interested, you could also look them up!

One of the very first cookery videos I saw online was from those 2 smart and savvy ladies at Show Me The Curry. These 2 Indian ladies are settled in the US and cook mostly Indian dishes. Even if they make dishes from other cuisines they customize it to suit the Indian palate-which helps a lot!

Betty’s Kitchen, is another show I follow. The cooking and explanations are done by Betty a retired professor while the filming is done by her husband Rick. She is from Kentucky and speaks with a distinct southern drawl. Initially I used to wonder as to why she was speaking so slowly until I realized that it was her accent! A really sweet and charming lady who barely looks 50 but is actually 60 plus! Her food is mostly American.

The next one is Titli Nihaan. A British lady who is well traveled and is open to trying out different dishes from different cuisines from all over the world. She hosts Titli’s Busy Kitchen and I really enjoy her spontaneity and sense of humor! This is one crazy old lady who definitely cracks me up!

Here comes the famous Nigella Lawson! She is yummy and whatever she cooks is yummy too!In fact she has earned the nickname of being the queen of food-porn ;-) I love her no-nonsense, down-to-earth, hands-on approach to cooking. Above all I absolutely adore her British accent (no matter what Russell Peters comments about the English accent!)

Last but not the least, comes Laura Vitale an Italian cook. Sigh! Sometimes I wish I was born in Italy! Their flawless olive toned skin, silky long hair, sparkling clear eyes! Oof! And they get to eat all the cheese in the world! Lol! Anyways Laura is a very energetic, beautiful and friendly cook and I love hearing her pronounce the names of the Italian dishes, well in Italian as they should be!

I notice that I have only listed female cooks. Although I do watch men cooking, I guess I somehow prefer it if women cook! (Pre-conditioning?!) Of the men I would pick Sanjay Thumma from Vahchef for his absolute passion towards food and cooking as well as Chef Damodaran, who kinda looks like a dark Santa-minus-the-beard! Both seem to be jolly old fellows who would love to dig into a huge plate of food at any given time! I do not like the other famous chef Sanjeev Kapoor mainly because his shows are in Hindi, which I don’t follow. Also I haven’t gotten down to watching a whole lot of other celebrity chefs like Jamie Oliver, Nigel Slater, Julia Child (Although I did watch Julie & Julia, which I found to be charming!) Maybe I will someday ;-)

And then of course, there is the whole world of extensive food blogging, drool-worthy food blogs, wonderful food photographers and talented food bloggers! Well, that is something for another day!