Of mango forests and lazy rivers... 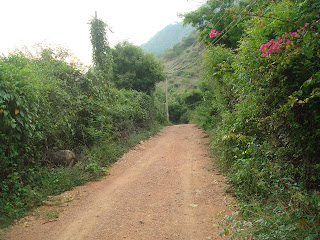 I had mentioned earlier that we had been on a short vacation to India recently. So during our vacation, we thought of heading out somewhere nearby maybe for a short trip. I wasn’t particularly interested in visiting the done-to-death tourist spots of Ooty, Kodai, Yercaud etc and was looking for a different kind of place. We just wanted to spend some time relaxing, taking in nature and enjoying some solitude. Several options were discussed and subsequently rejected due to one reason or the other. Then my father-in-law produced a paper cutting which he had saved from months ago. It was about a charming resort called Double Dutch Resort in a remote place in Tamilnadu. No one we spoke to had ever heard of the place. After a lot of discussion we decided to give it a go anyway, albeit with a little apprehension. And so we started off on our journey towards Dindugal.

After stopping in Dindugal for lunch and savouring the popular and quite expensive if I may say so, Dindugal Thalapakatti biryani (which btw I didn’t particularly enjoy - though the others did) we set about enquiring the route to our destination. Being off-the-beaten-track made this place a little difficult to spot. Eventually after many a phone call to the resort, stopping and asking people “vellakaaranga nadathura hotelkku eppadi poganum?” (“How do we go to the hotel run by some foreigners") and several wrong turns later - we finally arrived at Double Dutch Resort.

The resort was everything it promised to be. The only problem we had was that there was no air conditioning :-( Since we had landed in April, although it was not as swelteringly hot as in Chennai it was still a little too warm for our comfort. The very helpful caretaker informed us that there was another resort further up the hills which was equipped with AC and so we thanked him and went on our way on a rater bumpy dirt road to find this other resort named Wild Rock. I must say it is truly a hidden gem.

Wild Rock is situated further up the hills and so is in an advantageous position to boast of a grand, sweeping view of a beautifully still lake reflecting lush green forests and a gushing waterfall in the distance - all set amidst jagged, rocky cliffs. This resort is relatively new on the scene and so we did have a few minor glitches-such as the AC dripping water into the room (although it was fixed soon) and pretty dim lighting – which made reading a pain. But on the whole it is a clean and comfy homestay with friendly and attentive staff. Food is also very homey and you can ask for whatever you want to have for the next meal-it will be promptly whipped up for you.

After a good night’s sleep, we set off for a short trek which led us through a mango farm with mango trees heavily laden with luscious fruit. We just had to reach up and pluck a few, fresh off the trees! We ended our trek at a small, winding river. We waded through it, found dome sun-dappled and smooth rocks and spent some time just lying in the cool, rushing waters looking up into the blue skies with wispy clouds, listening to the chirruping of birds and the buzzing of the bees and dreaming about heaven :-)

We stayed for a couple of days at Wild Rock and we were quite happy about our decision to check this place out. They have lovely gardens and we are told that a wide variety of birds come to visit, including peacocks-although unfortunately we didn't spot any. As I said, it was warm being summer but I imagine that everything would be just perfect if one visited sometime from Nov-Feb. Wild Rock is planning to expand and construction of a swimming pool was in progress while we were there. The resort is near the villages of Aathur and Sembatti close to the Kamaraj Valley. Next time if you are looking for a short, peaceful getaway away from the hustle and bustle of city life-do give wonderful Wild Rock Resort a shot! You will not be disappointed!

The area also has other resorts whose primary focus is on eco-tourism and providing a serene atmosphere to their guests. A few that we spotted are Cardomom House, Lakeside Guest House and Peacock House. Reviews from Tripadvisor if you are interested.