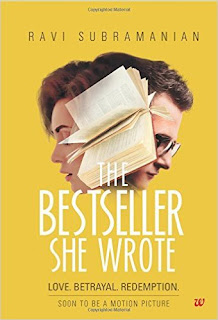 When the opportunity to review popular Indian author Ravi Subramanian’s latest book came up, I jumped at the chance. I’ve read some of his earlier books and have found them to be quite engaging – except for certain chunks in most of them which delved far too deeply into the world of banking; In my opinion for a layperson such as myself most of the banking processes and procedures that he usually describes in depth tends to be a little dry and I often just skimmed through those passages. However, touted as a “middle-aged romance thriller” The Bestseller She Wrote, promised to be a little different.

At first, The Bestseller She Wrote seems to be just another novel based on the drama and dilemmas involved in relationships. The character sketch of Aditya Kapoor definitely reminded me of Chetan Bhagat – or perhaps Subramanian was simply describing who he aspires to be? In any case, we have the male protagonist who apparently has it all – money, fame, success and a loving family to boot. And we have the female protagonist, the femme fatale in the form of Shreya Kaushik – beautiful, smart and sexy. What transpires between them when there is mutual admiration and crackling chemistry between two people who see each other and interact with each other almost every day, especially in this age of social media and instant messaging when it is oh-so-easy to always remain connected to each other's consciousness? I liked the fact that Subramanian has added several layers to most of the characters and made them believable. He doesn’t really project anyone as totally bad or completely good – he shows them as human, with their positives and negatives. He doesn’t paint anyone as a saint or a sinner, but rather as people with different shades and facets to them. I also like the fact that he weaves in real life events, situations and people into the story, thus making it more relatable and relevant.

I think that Subramanian wanted to push himself and explore a different genre of writing with this book. After a series of books on banking, crime, fraud and the like, perhaps he wished to test himself, to try and see if he was as good with writing romance as he is with writing thrillers. Or perhaps he wanted to reach out to a wider target readership base. Or maybe he figured that a little bit of spice could help him land a movie deal in Bollywood for his book. Whatever be the reason, I must confess that I personally feel that although the romance part of the novel is altogether fine, it does not match up to his skill in crime fiction. At one point in the book, he talks about how Aditya Kapoor doesn’t seem to be comfortable writing erotica – and I have a sneaking suspicion that he is talking about himself. Maybe it is a cultural thing but many Indian authors – especially male - seem to be unable to grasp the sensuousness of intimate scenes.

While the intimacy might be racy or even straight out of the fantasies of the male mind, it isn’t as seamless and smooth as one might have liked. The pace of the book only really picks up halfway through, when Subramanian lands onto his comfort ground and does what he does best. The twists and turns that one has come to expect from his books don’t disappoint here as well.

The Bestseller She Wrote is also peppered with helpful tips and useful pointers for wannabe writers. Perhaps, the author got tired of doling out the same advice for the rather repetitive question that one tends to ask authors: “What tips would you give for new authors?” and decided to pen them down once and for all so that the next time when someone asks this question, he could simply direct them to this book!

On the whole, The Bestseller She Wrote makes for an interesting read. It gives us a peak into an author’s mind and life, and also a glimpse of how the publishing industry works today, while simultaneously living up to its promise of being a good thriller, if not a great “romantic” thriller!

I am reviewing ‘The Bestseller She Wrote’ by Ravi Subramanian as a part of the biggest Book Review Program for Indian Bloggers. Participate now to get free books!
Posted by Anne at 10:00 AM