One of my hobbies for the past few years has been cooking.
I love experimenting and trying out new dishes-when I overcome
my lazines, that is ;-)
I don't usually post any recipes or cookery tips here as this is basically not a cookery blog and I don't really want to add my contribution to the nth recipe you can find online for virtually anything!
Except if I have had some interesting experience in the kitchen.
This is one such incident when a potential disaster turned out to be a pleasant indulgence!
As my birthday was around the corner, I was thinking about special dishes to prepare for my special day. Coincidentally my friend Anu told me about a recipe that her MIL taught her, for a dish called Banofee Pie. Looking it up on the internet would show you that it is quite a popular and easy dessert. So I decided to try it out. Now the recipe calls for a can of condensed milk to be immersed in boiling water continuously for around 2 or 3 hours. A process which changes it to a light brown, creamy (& yummy!) caramelly toffee.
So I asked Ajay to buy a can of Milkmaid (My Mistake No.1). Milkmaid is just a brand name of a particular company's condensed milk product. But in India, Milkmaid is to condensed milk, what Xerox is to photocopy-they are synonymous.
Which kid (or even adult in my case ;-)) doesn’t like licking up the remaining drops of milkmaid left in the can-carefully without cutting yourself on the serrated opening- while mom is busy preparing Diwali sweets?!? Oh the simple pleasures of Life!! Sigh!
Anyway Ajay got me this can and since it had some Arabic label, I didn't really pay much attention to it (My Mistake No.2- Read the small print!). I happily put it to boil, prepared the pie crust, chopped up some bananas and waited patiently for a couple of hours.
After 2 hours, I carefully opened up the can and peered in expectantly-and was shocked!
All I saw was a milk kinda thingy-it didnt even taste sweet!!
How could condensed milk, de-condense into a normal milky consistency after boiling around in the pot for 2 hours?!?!? Quite puzzling!!
After calling up my husband and arguing for some time, I ran down to the grocery store to check out what exactly I had on my hands. (The label had peeled off while boiling in water and I had thrown it out)
Well, looks like hubby dear got me 'evaporated milk' instead of condensed milk!
So I ended up with a can of 2-hrs-boiled-evaporated-milk, a bowl of bananas and an empty pie crust :-(

"This will not do!" thought I and decided to get into action.

I threw in the bananas with the evaporated milk, a few drops of vanilla essence, some sugar, mixed them all up, refrigerated the stuff and voila! Got some banana custard kinda thing! It was good to eat :-)

Now I had this pie crust. I wondered what to do with that for a couple of days.
Then.... Inspiration struck!
I made this: 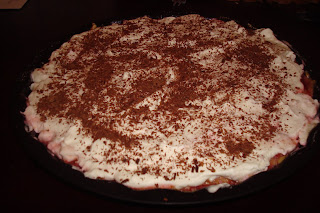 You can call it whatever you want!
It is derived from the whole lot of jams, pies, puddings, cakes and desserts around!
Whatever it is, it was oh so lovely!! Try it!
So here goes the very first recipe that I am blogging:
(I just did whatever came to my head-so the quantities and timings are only approximate!)
Ingredients:
For the Crust
1 big pack of Marie biscuits/ or a readymade pie crust
50-100 gms unsalted/salted butter- softened
For the Toffee Filling
1 200-300 ml tin of condensed milk (This time I made sure I bought the right one!)
For the Plum Sauce
6-7 plums (Thanks to Sandy for this. He bought a whole lot of fruits for the GM’s diet and never followed it! So he dumped the plums on us-Ajay & I wouldn’t have bought it-coz we both are really poor eaters!)
An inch long piece of Cinnamon
For the Finishing Touch
Handful of chopped nuts (Walnuts, Almonds whatever you choose!)
Whipped cream or Whipping cream + few drops of Vanilla essence+ 3 teaspoons powdered sugar
Chocolate shavings

Method:
Place a heavy bottomed vessel, like a cooker or a big saucepan on the stove.
Fill it with water, drop the unopened condensed milk can into this.
Bring the water to a rolling boil and then let it boil gently for 2-3 hours.
Meanwhile wash the plums well and add them to another saucepan with sufficient water to immerse them.
Throw in the cinnamon.
Bring this to a boil and continue boiling till the fruits become mushy and the water reduces-say about 30 mins or so. After this, pass the boiled fruits through a strainer, press well on the skins and fleshy parts that are left behind and strain well.
Return this to the stove and bring to a boil again. Add about 5 teaspoons of sugar, mix well and continue simmering, stirring occasionally.
While this is boiling, let’s make the pie crust. If it is a readymade one, just follow the instructions on the pack. Else, first crush the biscuits well with a rolling pin to a coarse powder.
Mix this with the melted butter and press and line a pie pan or cake tin or glass bowl or any other container in which u want the pie to be in. Refrigerate this for 20-30 mins till it becomes firm.
If you’re using whipping cream, whip it for about 3 mins with the sugar and essence till fluffy.
By this time, the plums should have boiled for an hour or so. They would have thickened to a syrupy texture and gotten a couple of shades darker- a nice, deep, beetrooty pink. At this stage, turn off the stove.
After the condensed milk has boiled for a couple of hours, pour out the hot water, pour in some cold water and open the can carefully (Don’t burn yourself!). Your toffee is ready.
Spread the contents evenly with a spoon or knife over your pie crust.
Following this spread the plum sauce.
Top this up with the chopped nuts.
Finish it off with the whipped cream. Sprinkle some chocolate gratings.
Chill in the refrigerator for a couple of hours, slice and…. Bite in!!
The crumbly crust offsets the creamy toffee and plum sauce and you bite into the occasional crunchy nut or two, while the whipped cream just melts in your mouth! The sweetness of the toffee balances the slight tartness of the plums. On the whole it is simply superb!
Note:
• Cinnamon is optional-if you don’t like the flavor of cinnamon flavor you can skip it. If you like nutmeg or cloves you could add them instead-or completely skip the spices too.
• For the plum sauce, try using a non-stick vessel. The white saucepan I used is now pink (Should have applied some common sense!)
• Instead of chocolate shavings (or in addition to that if you’re a chocoholic like moi!), you could drizzle chocolate sauce or coffee syrup on top.
• A quicker version of this would be to use ready-made jams/jellies. But trust me-homemade tastes best.
• Be sure to cool down the plum sauce a little before putting the cream on top. Else the cream might curdle.
• If you are interested in making plum jam, try this:
Continue boiling the plum sauce till it is even thicker. Keep a spoonful in the refrigerator and check for the consistency. If it becomes jam-like, you have homemade plum jam ready! Since berries naturally have pectin, you do not need anything else to set it. But add a few teaspoons of lemon juice while boiling the plums. 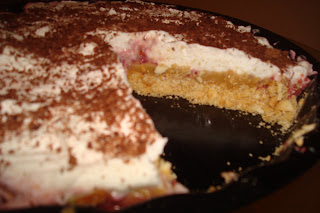 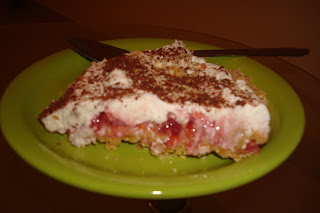 For once, don't think about the calories- just Indulge and Enjoy!!
Posted by Anne at 4:12 PM